View source
watch 01:36
We're Getting Mutants in the MCU - The Loop
Do you like this video?
Play Sound

Yukana
Ai Nanasaki (七咲 逢, Nanasaki Ai) is one of the main female protagonists of the story and the main protagonist of the 4th arc. She is a student of class 1-A and a classmate of Miya Tachibana and Sae Nakata who is also an aspiring member of the official Girls' Swimming Team.

She is revealed to have become the President of the Swimming Team in the first episode of her arc on Amagami SS+.

She wears the school's uniform and she is the only known girl to use a blue sweater instead of the regular beige one that most girls use. Being part of the swimming team, she is mostly seen wearing a swimsuit, which she sometimes wears under her uniform.

Ai tends to be cold and reserved, hanging most of the time with Miya Tachibana and Sae Nakata. However, when she meets Junichi Tachibana (Miya's older brother), Ai soon falls for him despite having a low opinion of him at the beginning. She possesses a cool and calm disposition which got her some fans in school, and also was noted by others that she acts mature for her age, though sometimes she acts the opposite.

Junichi Tachibana meets Ai at the park while on his way to the Park Public Toilet in the evening, accompanied with Masayoshi Umehara. They accidentally peek underneath her skirt as she jumps from the swing. Ai notices, labels them as perverts and jokingly teases them by saying she will call the police.

The next day, Junichi meets Ai again during lunch with Ai yelling at him due to him taking too long for choosing a lunch set. In the afternoon, during her swim training, she goes out to find a black cat she named Pooh and meets Junichi again. This time, she teases him after she realizes that Junichi is trying to peek underneath her skirt again, revealing to him a swimsuit worn underneath her skirt. She tells him that what he saw underneath her skirt during their first encounter was also her swimsuit. Before departing, she reveals to Junichi that she is Miya Tachibana's classmate and warns him that she doesn't want her best friend to have a pervy big brother.

Ai meets Junichi again on the next day inside the school library with her studying to get a better grade, while Junichi, Umehara and Kaoru Tanamachi try to get a look at the new librarian girl. She is soon being taught by Junichi in Math due to Kaoru and Umehara's suggestion, which impresses Ai and changes her view about Junichi.

As the series goes on, her relationship with Junichi becomes closer, which can be seen when they go shopping together. Junichi teaches her about an Inago Mask toy, talks about taking care of Ai's little brother, have fun at a park, and her feelings can be revealed during her depression after being unable to join the swimming competition.

On Christmas day, Junichi helps Ai with taking care of the Swimming club's Oden stall. After the party, she takes Junichi to her secret onsen and they take a bath together. The arc ends with Junichi sleeping on her lap and Ai spoils him on the side of the beach.

Ai feels down for not having a swimming club activity that Junichi Tachibana decides to cheer her by talking in the place where he and Ai have met before for searching Pooh. In the end of the OVA, Ai is hugged by Junichi by holding on her skirt pockets, which makes her shy and Ai tells him that she needs to hurry and do her shopping. Junichi agrees to come along with her.

Takes place a year after the Amagami SS Ai Nanasaki arc. In the beginning, Ai is seen with Junichi Tachibana on the beach, spoiling each other. In the next day, Junichi decides to take a look for her in her club time. However, soon Junichi is scolded by the girls which is worsened because Miya Tachibana joined the fray (though at first he was scolded by Ai herself and planned to be forgiven). At night she is thinking about where she should have her next Christmas date, as she can't take Junichi along with her to her family's private onsen because of the deer's population problem.

However, the next day, Junichi apologizes to Ai because he failed the cram's school exam due to his clumsiness for answering the questions wrong for a slide (and he even said the answers are supposed to have a good mark). At first, Ai forgives him and just let it by due there will be a remedial exam. But her hope is downed because at midnight, Junichi is forced to go for supplementary lessons which is revealed by Miya (Junichi told Miya to deliver the message of his sudden urgent).

In the Christmas Eve, she walks around and reminds herself about her time with Junichi when he was together with her, which makes her cry as she misses him. Soon, Junichi comes to her while she is looking at the Inago Mask's belt toys. They have their times afterwards until they accidentally meet with Maya Takahashi (though they don't realize that she is halted by Masayoshi Umehara for some moment).

In the end of this arc, Ai wakes Junichi to watch fireworks. This end might be a year after the SS+ is finished because Junichi stays in an apartment for his college activities.

Taking time after Ai's date with Junichi Tachibana when he was escaping from cram school study. She nurses Junichi because he has a fever. In the end of it, Ai is influenced by Junichi's fever due of his fault for hugging Ai while he was still and Junichi takes turn to treat her this time.

In Ai's route, she is portrayed as a girl who places swimming above everything and she sees Junichi Tachibana as a bit childish for his age, possibly in part because he reminds her of her own little brother.

Ai's relationship with Junichi Tachibana strains her swimming performance and puts her at risk of not being qualified for the tournament. They work things out and Ai manages to stay in the swim team. After the festival, they spend their Christmas in a hot spring in the mountains. Junichi realizes how much she means to him and confesses. She accepts and hugs him while they are both in the spring. Many years later, they are seen again watching fireworks from their room.

Ai and Junichi Tachibana spend Christmas at the school festival. He confesses to her on the rooftop and she accepts. They watch the lighting of the Christmas tree together.

Many years later, they're both working in different companies. Ai is late meeting Junichi Tachibana at a ramen stand because her boss chewed her out for not being married at her age. Junichi mumbles something about marriage while Ai smiles and asks him what he just said again.

If Junichi Tachibana stood Ai up on Christmas, she is hurt and she doesn't talk to him for a while, but she eventually forgives him anyway. Many years later, they're talking to each other on a beach with his head on her lap. She realizes that she can never stop loving Junichi.

Ai taking her shirt off. 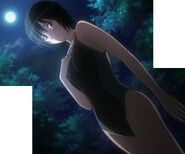 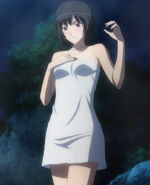 Ai visits Junichi to wake him up 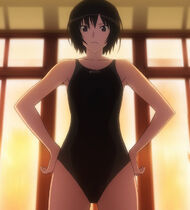 Visiting Junichi in the school infirmary

Junichi and Ai finally spend time together on Christmas Eve 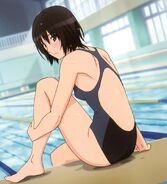