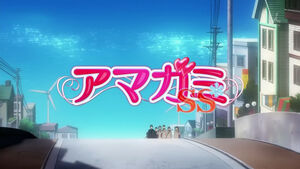 Amagami SS is the anime adaptation of the Japanese dating simulation game Amagami. It has 25 episodes and one OVA. The anime adaptation is divided into six four-episode story arcs where each arc focuses on one of the main heroines. The Christmas special episode covers the story arc for the heroine Risa Kamizaki, while the OVA released in April 2011 depicts a side story with the younger sister Miya Tachibana. The anime has ten pieces of theme music: two opening themes and eight ending themes; each ending theme is sung by the voice actresses of the heroines of the series in their respective story arc.