Tomoaki Maeno (Japanese)
Junichi Tachibana (橘 純一, Tachibana Junichi) is the protagonist of the anime series and video game Amagami. Two years ago, he went out for a Christmas date with a girl that he'd recently confessed to. Unfortunately, she never showed up. Since that day he grew hesitant in the matters of love and despise Christmas Day. However, when he meets one of the six girls in the school, he might have a chance to change his current lifestyle.

Junichi has black hair and black eyes. He wears the standard school uniform. He usually seen wearing black coat rather than vest.

His casual wear consist of a long-sleeve white v-neck with blue jeans. When Junichi is outdoor, he would sometimes wear a brown overcoat.

In the anime, it was seen numerous times that Junichi has acrophobia, as in a fear of heights. However, it seems that 6 girls of the anime seem to accept that. 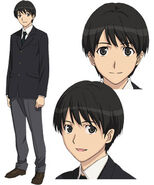 Retrieved from "https://amagami.fandom.com/wiki/Junichi_Tachibana?oldid=7661"
Community content is available under CC-BY-SA unless otherwise noted.