Kana Asumi
Miya Tachibana (橘 美也, Tachibana Miya) is a secondary character of Amagami SS. She is a student of class 1-B and the younger sister of Junichi Tachibana.

Miya has black hair and black eyes. She has slight resemblance to her brother. In school, she wears their standard school uniform.

She is a playful girl, and tends to call her brother "Nii-Nii" which sometimes annoys Junichi secretly. She tends to be jealous when her brother is with another girl, with the exceptions of Sae, Ai and Rihoko, who are her close friends. She was always seen walking home with Sae and Ai. She also has a habit of teasing Sae when it comes to Sae's breast. Her favorite food are meat buns. 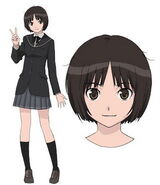