Her and Juinichi's Daughter (In Tsukasa's Arc)

Kaori Nazuka
Tsukasa Ayatsuji (絢辻 詞, Ayatsuji Tsukasa) is one of the main characters of the series. Her story is in the final arc. She is the 2- A class representative, organizing activities and addressing directly to her teacher, Maya Takahashi.

She has black hair with a "hime cut" and black eyes. She wears their standard school uniform.

Described as a hard worker, she is one of the best and most popular students of Kibitou High School. Her innocent behavior is just an act to cover up her true self which is very manipulative and cunning, to the extreme of blackmailing the main character in the PS2 game (Junichi in the anime). She has been described as a tsundere which are clearly shown in episodes 22 and 23 in the anime. Despite making Junichi her "slave", she started to have feelings for him, as to the point of telling him to make him hers and erasing her "black personality" for him, but Junichi tells her that he loves her just the way she is.

She have a gentle personality and works hard to make the Founder Festival of Kibitou as the 2-A class representative and the president of the festival organization committe. Her reason to do that is to give happiness to everyone.

When Junichi Tachibana finds her diary, she shows her "Dark Side", and has Junichi keep it a secret by intimidating Junichi.

A few days later, Ayatsuji-san shows her Dark Side to her classmates because Yayoi (a classmate) was saying that Ayatsuji and Junichi are dating and not working.

After that, she goes to a temple with Junichi to burn her Diary. Afterwards, she confesses her feelings to Junichi.

Because Ayatsuji has revealed her dark side to the class, the class then leaves Ayatsuji alone to handle the festival organization committee work. The situation of the committee is complicated, and Tsukasa is forced to seek help from her classmates again.

Trying to erase her Dark Side, Ayatsuji-san turns back to a very gentle girl like she was before the discovery of her real personality. Finishing the festival's preparations and ending the festival Junichi confesses to Ayatsuji that he likes both sides of her, she becomes frustrated and hits junichi but cries as she is happy to be loved by junichi the way she is, they both share a kiss before the credits and promise to remain by each other's side forever.

In the epilogue of her Arc 10 years later, she is married to Junichi and they have a daughter. The three of them visit the founders festival where their daughter asks if this is "Mama and papa's special tree?", her Arc ends as she asks junichi "if he is happy now?"to which he immediately replies "yes", she kisses Junichi on the cheek and their daughter joins to kiss him on the other side of his cheek. the three of them happily watch the Christmas tree and wish for everyone's happiness.

Taking time when she went home with Junichi in the evening time. Junichi takes a look of the van which sells Melon Pan. Tsukasa tells Junichi to wait and let her buy it when Junichi admitted that he was curious about the taste because Miya had told him. She surprises Junichi by buying so many Melon Pan which is implied by Junichi that she must have used her innocent action to lure the owner to give her more. At first, she teases Junichi by giving the piece of the Melon Pan and eats it in front of him. But soon, after the second time and being told "meany" by Junichi. She gives the piece, by piece, and continue on forcefully even though Junichi hasn't finished to chewing the bread.

Taking place a month after the Founders festival in Amagami SS, Tsukasa joins the school committee's candidates for student council president and soon finds herself a rival, Mea Kurozawa. She is defeated at the first vote tally badly as she obtains 3rd place, but soon obtaineds the 2nd place because she is able to steal the fans from Hanazawa, the only male candidate because of his carelessness to drop his backpack full of porn mags in front of a bunch of girls. She gives her speech to the school and ends up winning the president election with Junichi becoming her vice-president. As the series goes on in this arc, she is as strict as ever to Junichi, revealing that she is tutoring Junichi so he can be with her in the same university. And she didn't even realize that Mea actually joined the election to steal Junichi from her.

The episodes of Tsukasa Arc in SS+ happen prior to the Amagami SS Epilogue. (Mentioned Above in Amagami SS)

Taking the events when Junichi asked her to take a photo for poster for her voting. She is made to wear many different outfits which will affect many males to vote for her by looking at her appeal. However, despite many photos being taken by Junichi, only the plain photo is used for her poster. The special event ends with Tsukasa stealing Junichi's hidden photos of her from his pocket.

In her route, she is a hard working class representative. Image is extremely important to her and acts kindly towards others. In reality, she's very distrustful of people and very cynical. She can be mean to Junichi, but her love is sincere.

Tsukasa is accused of flirting with Junichi while planning the Christmas school festival. She reveals her real, cynical personality. Everyone begins to hate her, confirming her cynical belief that people liked her just because she was a class representative. Junichi becomes her sole pillar of emotional support, and later Kaoru joins in defending her. She quits being a class representative and forgets about her perfect image. On the night of the school Christmas festival, she and Tachibana sneak into the school and celebrate their own party there. They spend the entire night there.

Her true personality is never revealed and she never quits being a class representative. She plans out the party. She hugs Junichi under the Christmas tree in front of everyone. There's a myth that whoever hugs under the tree becomes happy forever. Many years later, Junichi and Tsukasa visit the school. She tells him that she's afraid because she's been happy for so many years and hopes that happiness will never end. Their child runs up to them.

Tsukasa and Junichi go to the same college and share the same room. She kicks him out of bed while making breakfast and orders to him to always make her happy.

If Junichi stoods her up on Christmas, she does not forgive him. She says﻿ that the girl he used to know doesn't exist and she feels betrayed by him. Tsukasa feels that Junichi is the same to her as everyone else and vows that she will never trust anyone again.

When her story arc was released in the anime, it differs from the PS2 game. The most notable difference is her ending in the anime which is mixed with some of the endings from the game; Best end, where her true self was revealed to her classmates and Good end, where after a 10 years later epilogue, they visited the Kibitou High Founder's Festival with their daughter. Though when her true self was revealed she didn't quit as a committee as with the game does, instead, follows Junichi's advice and apologized to the girls and continued her position as the planning committee. This together forms the 'Best' end in her anime version.

Before the anime was released, Tsukasa was ranked below three other girls despite being featured in the game box cover. But she makes a comeback when her anime version was released, making her the most popular girl in Amagami SS, she has been ranked number one in a lot of famous bloggers and sites.

A Drama CD for Tsukasa was released and the story takes place three months after the founder's festival and her class is selected to plan a graduation ceremony for the third years. The story also focuses a bit on Tsukasa's family problem and Junichi's decision leads to the 10 years later epilogue shown in the anime. 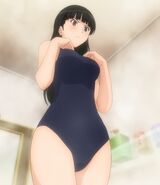 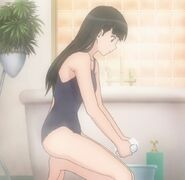 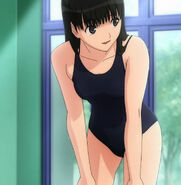